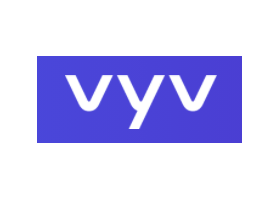 Vyv is a healthcare solutions company that produces antibacterial LED lighting, which continuously kills harmful bacteria — such as MRSA, Listeria, E. coli, and Salmonella — on surfaces while illuminating spaces with optimal white light.

A new line of under-cabinet lights that incorporates Vyv’s LED technology, geared toward residential customers, is now on the market through one of the company’s partners. The lights can be used to disinfect sinks and countertops in bathrooms, kitchens and other home spaces.

“If you bring home raw meat or eggs and set them on your counter, for example, our LED lighting can protect you from potential Salmonella or E. coli contamination,” says Colleen Costello, Vyv’s co-founder and CEO.

Vyv sells its patented LED technology through partnerships with lighting fixture companies. Types of lights include LED troffers for ceilings which can be installed in new construction or retrofitted into existing fixtures, slot lighting for architecturally designed spaces, task lighting for residential, commercial applications, and more.

The company, which engineers its antibacterial lighting at the Rensselaer Technology Park Campus, partners with LED and lighting manufacturers around the world, including in the Hudson Valley region, Wisconsin, China, and Spain.

Vyv, which has 16 employees, moved into the Technology Park from a previous location in 2016.

“Being in the Technology Park has been fantastic for us,” says Costello, who noted that there is room to expand as the company continues to grow. “The space already included the lab benches that we needed, and we were able to quickly set up all of our LED tools and photometric equipment.”

Vyv was co-founded in 2012 by Costello, who graduated with a biomedical engineering degree from Rensselaer Polytechnic Institute. Her quest for developing an innovative anti-bacterial lighting technology began when her grandmother caught a MRSA infection, caused by antibiotic-resistant staph bacteria, during what was supposed to be a short stay in the hospital.

“Developing our LED technology started around the issue of surface contamination and looking at how we could address that,” Costello says. “Often, hospital surfaces are cleaned once a day, so there are all these intermittent periods of time in which people can possibly come in contact with germs.”

Vyv uses a precise spectrum of light that kills bacteria but that is harmless to humans, animals and plants. This means that the antibacterial lighting can be used continuously — it doesn’t have to be turned off when someone enters a room — because it contains no harmful ultraviolet (UV) rays.

The wavelength, which is in the visible light spectrum, gives off a deep violet hue. At the core of Vyv’s patented technology is how other colors (green, blue, red, and yellow) are mixed to produce a balanced white light that’s ideal for completing tasks, whether in the emergency room or at the kitchen counter.

Vyv has worked with a number of research partners, including Rensselaer Polytechnic Institute, Mount Sinai in New York City, New York State Department of Health, UCLA Health in Los Angeles, and Bayfront Medical Center in Florida. The company has several patents, along with additional patents pending.

In the Spring of 2018, the Technology Park Campus will begin installing Vyv product solutions at selected facilities in Park.